Jeff Ooi of Screenshots referenced two views on the issue of racial discrimination in Malaysia on 21 Sep 2006. I add, in part, my own below.

Lee expressed in a forum last week that Singapore should stand up to its bigger neighbours, Malaysia and Singapore, which are affected from this issue. He said “Our neighbours both have problems with their Chinese. They are successful. They are hard-working and therefore they are systemically marginalised.”

Najib responded by declaring that “Malaysia does not practise a policy of blocking opportunities for non-bumiputras to progress further. It’s a comment that we can do without. It is not appreciated at all.”

A Malaysian academic living in London, Sathia Varqa, presented a paper entitled “Positive Discrimination in Malaysia: Should we continue to favour the Malays?” on 21 Sep 2006.

In the paper, Varqa says that although Malaysia is generally known as a harmonious multi-racial society, the single discrimination of people by race has been and will be a “deep danger” to the success and stability of the country. Moreover, it is known the priority and benefits bestowed on the single group have been regularly brought to the media spotlight but has hardly been challenged or justified.

Varqa states three effects of such classification in the Malaysian society:

Varqa charges the need for all Malaysians “to be bolder in our argument and constructive in our reasoning.”

Malaysia and Indonesia are not the only countries suffering from racial discrimination. Many other countries have it, less choose to positively deal with it than desired. I can recommend a few good optometrists to Najib. Lee’s statement that the Chinese are compartmentalized because they are hardworking is not accurate; rather the Chinese stand out from the preferred racial group as a result of their attitude. It could have been, and very likely is, true if the hardworking people are not the Chinese, but the Indians or other races.

There are policies put in place to allow any or better opportunities to the Malays, and then there are policies that are in response to “adjustments” or “moderation” necessary to be made. Such moves do not serve to level criteria or privileges, by the way.

Students have seen many times when their well-earned education results do not give them even the chance to apply for scholarships. For those who do obtain them, it is often seen that the preferred group have not and do not perform as well in the subsidized programmes.

Businesses have been forced to conform to procedures that are obviously unnecessary to their business objectives in the country. When that is done, they then often have to provide favours to the preferred group in order to sustain or expand their economies. Think of the various business and government services and departments companies have to face regularly and there won’t be a need to state names here.

Malaysia is a country and in a region where all areas of growth are needed. To the north, Thailand has been an upcoming regional export market and Singapore in the south is by no little means one of the best examples of a mature and stable society. In the former Prime Minister Mahathir’s era of economic growth, there is obviously a strong desire to excel as a country among its peers.

Malaysians cannot compete among and build themselves (with good conscience and pride) and on the global arena progressively if this internal issue is not tackled at its reins and has no action taken to resolve it. 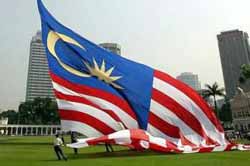 How does the national education quality benchmark appear when the standards are so skewed and many students are not earnestly taking advantage of their privileges? Will companies prosper or even maintain their bottom lines when they have to constantly deal with unrelated bureaucracy, corruption and unfair practices in the country? Can all the different races really live together peacefully when the physical landscape is full of partiality in terms of the law, policies and culture? How long does it take for the “Bumiputra” system to mature and justify its goals are met?

Until I can think of more to say on this serious but sorely ignored issue, I leave you with these lines.

“If discrimination based on race is constitutionally permissible when those who hold the reins can come up with ‘compelling’ reasons to justify it, then constitutional guarantees acquire an accordionlike quality.” – William Orville Douglas

“The only thing necessary for the triumph of evil is for good men to do nothing.” – Edmund Burke

2 thoughts on “Three Viewpoints on Racial Discrimination in Malaysia”

Your Computer Can Help Cure Cancer!